Just because your horse isn’t grazing doesn’t mean he is safe from all equine parasites. 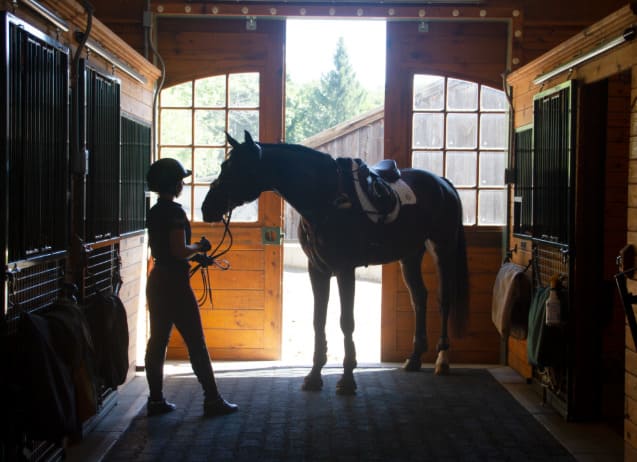 When we, as horse owners, think about equine parasites, we usually envision our horse grazing, picking up infective larvae (stronyles) or infective eggs (ascarids). So, what about a horse that doesn’t graze and spends all of its time in a dry lot or stall? This horse still needs to be dewormed, because there are certain types of equine parasites that are transmitted by flies, there are parasites that can be encountered in infested hay, and there are horse-to-horse parasites.

There are some equine parasites that flies transmit; thus, all horses, whether grazing or not, are susceptible to infection. These include bots (Gasterophilus), the stomach worms Habronema and Draschia, and Onchocerca. Habronema and Draschia are responsible for producing "summer sores” or non-healing wounds, caused when flies whose maggots become infested with these larvae, then deposit them on the horses lips, nostrils, or open sores. The horse licks these larvae, they are swallowed and travel to the stomach to establish egg-laying adults. When deposited in wounds, they become “summer sores”.

Onchocerca, the Equine Threadworm, lives under the skin of horses, can cause dermatitis, and has also been associated with moon blindness and fistulous withers. While most areas of the US are free of Habronema, Draschia, and Onchocerca, due to the use of ivermectin over many decades, these parasites are still a major concern in arid regions, where horses typically are dewormed much less frequently. Bots are still present in most regions of the country.

If a stalled or dry-lotted horse is fed hay containing grain mites from areas where horses are infested with tapeworms (Anoplocephala sp.), the mites may contain the intermediate form of the tapeworm called a cysticercoid. By eating the infested hay, the horse may contract tapeworms, which have been associated with several types of equine colic.

Lastly, pinworms are directly transmitted from one horse to another. This happens most easily in stalls and corrals, because pinworms cause irritation near the anus, the horse rubs its tail and rump against a stall or fence, where the eggs stick, waiting for another horse to lick and swallow them.

Just because your horse isn’t grazing doesn’t mean he is safe from all equine parasites. The good news is that ivermectin, found in Equell, Equimax, and Bimectin, is very effective against all of these parasites, except tapeworms. For full parasite coverage, Equimax is recommended.

How To Administer Equimax 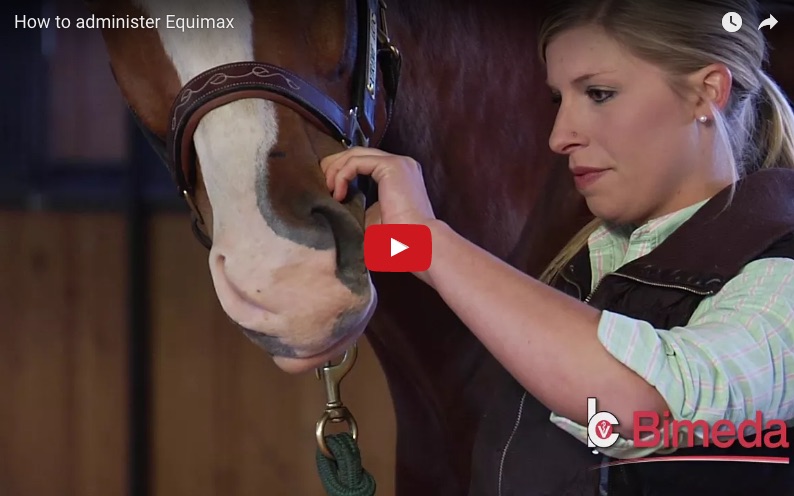 Consult your Veterinarian to determine the best deworming program for your horse.

FOR ORAL USE IN HORSES 4 WEEKS OF AGE AND OLDER. EQUIMAX® (ivermectin/praziquantel) Paste should not be used in other animal species as severe adverse reactions, including fatalities in dogs, may result. Do not use in horses intended for human consumption. Swelling and itching reactions after treatment with ivermectin paste have occurred in horses carrying heavy infections of neck threadworm (Onchocerca sp. microfilariae), most likely due to microfilariae dying in large numbers. Not for use in humans. Ivermectin and ivermectin residues may adversely affect aquatic organisms, therefore dispose of product appropriately to avoid environmental contamination. Trademarks belong to their respective owners.